Episode 19
Hajime Owari (尾張ハジメ) is a part-time worker at Shikada Dagashi. However, she is not paid as she lives there instead. She previously worked at Towns Mart but was fired because of her repeated lateness. Before that, she was studying at a famous university but dropped out[1] (it's possible she was kicked out due to her lateness).

Hajime a young bespectacled woman in her early twenties who has messy middle length hair with a distinct cowlick and slightly larger pupils than Kokonotsu and Saya. She has an average height and a shapely build. Her clothing consists of a white blouse under a navy blue blazer, a matching pencil skirt and black high heels. According to Kokonotsu, her glasses stand out.[1] 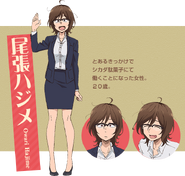 Hajime, before she began to work and live at Shikada Dagashi, was a university student who dropped out for personal reasons. She then began to work at a newly opened Towns Mart but was shortly fired. She applied to many other jobs but was turned down and applied for Shikada as a last resort. During her time at Towns Mart, she was nicknamed 'glasses' while other employee got unique nicknames, much to her chagrin.

Hajime is a very laid-back person, to the point of her being constantly late. She has a habit of saying what's on her mind without thinking about how it'll effect other people. She seems to be inquisitive about Kokonotsu's love life as she asked him if he had a girlfriend or not.[1] She appears to be artistically inclined as she noted the cubism design of Chocoball's mascot Kyoro-chan.[1]

Kokonotsu, at first, considers the possibility that hiring Hajime was a mistake, but he is partially reassured that it wasn't when he's impressed with her knowledge of Chocoball.

Community content is available under CC-BY-SA unless otherwise noted.
Advertisement