Episode 1
Hotaru Shidare (枝垂 ほたる Shidare Hotaru) is the main heroine of Dagashi Kashi. She came from the city to a suburban town where the Shikada's Candy Shop is located. Hotaru is very passionate about dagashi, and that she is willing to inherit her father's sweets company and make the best sweets in the world. 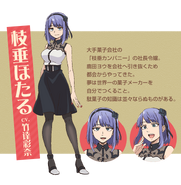 Hotaru has shoulder-length lilac hair that is accessorized with a flowered black headband, peculiar blue eyes and red nail polish.

Her wardrobe usually includes a white blouse with a red bowtie, a black skirt, black pantyhose and heels.

Hotaru always plans out to make Kokonotsu Shikada succeed the shop but it fails every time. She gets overly excited about candy and often makes Kokonotsu participate in strange activities involving candy (ex. a candy eating challenge in bondage), and also gives the impression of being overly dramatic. She's shown to be quite a database since she is very informed about different types of candy and the unique purposes behind each one. She has a deep love of dagashi as she is willing to eat Watapachi despite having a mouth ulcer.

Being the daughter of a candy developer, Hotaru has grown to love candy enough to have a passionate attachment to it. It's been said that Hotaru's family is very wealthy; also shown by how they had a mansion built near Kokonotsu Shikada's town for Hotaru to stay at during the time that she's there.[1][2] Her family also owns a private jet which she can use to go somewhere by herself (ex. going to a candy factory).[3]

Hotaru originally lived in the city before traveling over to the surburban town. She first appeared in the Shikada Candy Shop and she is greeted by Kokonotsu Shikada who found her cute, at first.[4][5] She later asks Yō Shikada (Kokonotsu's father) to work for her family company, but he refuses; saying that he wouldn't leave the shop unless Kokonotsu agrees to inherit the shop. From that point on, Hotaru decided to stay and has been inviting Kokonotsu to participate in schemes that will convince him to inherit the shop.[6][5]

Eating Too Much Dagashi[]

When she saw a boy holding a Gorigori-kun, she immediately thought of him as a shoplifter and quickly realized her mistake and found another problem: she cannot eat an entire piece of Kinako-bou. What Hotaru did was eating six pieces at once but she coughed; she also had Ramune to drink.[7][8] Hotaru then talked to Kokonotsu Shikada about how adults have their own responsibilities and even requested to him to be an adult with her. By doing so she gave him a glass of Namaiki Beer and she was drunk of the non-alcoholic contents of it.[9][8]

On her way home, Hotaru got into a bicycle accident where she tried to eat a popsicle while riding her bike which resulted in her falling into mud. She was then found by Saya Endō who helped Hotaru get cleaned up at her house. After Hotaru was finished showering at the Endō residence, Tō Endō walked in on her naked and passed out afterwards. Saya then told Hotaru that he was her older brother; Hotaru then held him (still naked) and started rambling about how thankful she is for his little sister's help.[10][5]

At one point, Hotaru turned off the shop's air-conditioner to prepare dagashi in the summer heat and did not acknowledge Kokonotsu Shikada's advice to turn it back on since some of the dagashi will go bad even though it's already broken.[11][12] Hotaru assisted Yō Shikada to ambush Kokonotsu as lifeguards to show the shop's situation to make him help out the shop more but it backfires. [13][12] She tried to teach a lesson to Kokonotsu and Saya Endō on how great dagashi are but Kokonotsu thought of it as another scheme of hers to inherit the shop and Saya supported her reason.[14]

Hotaru then played Menko with Kokonotsu Shikada and Saya Endō to kill time and Hotaru practiced it vigorously when she used her "Second Dance" technique to flip two cards and she trained for two years to perfect it. When she saw Saya flipping three cards in one try, she and Kokonotsu were shocked and she starts to address her as "Saya-shi".[15][8] One night, Hotaru and Yō were exchanging "powder" even though the powder is actually Bin Ramune and she tried to give it a good look to Kokonotsu even though she treats it like an actual drug.[16][17]

Hotaru gave thanks to dagashi shop owners who can create nostalgic memories; she was also happy that someone like Kokonotsu Shikada decided to take over the shop although he's not taking it over.[18] Hotaru then asked Kokonotsu if he likes boobs; when he gave his answer, she walked out of the place and when he said his true desires, she threw a Tamago Ice to him. She had an argument with Kokonotsu to tell wether it is like a bomb or a boob. To end the discussion, she ate a piece and it exploded in front of her face covering with the melted ice and she realized why it is like a bomb.[19][20]

Hotaru met Kokonotsu while she was looking for Yō Shikada. He thought that she was cute and was stunned by her appearance. Hotaru thinks of Kokonotsu as her rival when it comes to sweets, but she also has a friendly view of him since they often hang out in the candy shop. Her and Kokonotsu seemed to have developed feelings for one another, which is hinted at when she asks him about marrying her.

When Hotaru met Yō, she will follow what he says to have Kokonotsu run the shop but it always backfires as seen in Chapter 10 of the manga. If they are not planning schemes to make Kokonotsu to inherit the shop, they eat dagashi together and exchange information about it.

Hotaru is close friends with Saya, often calling her "Saya-shi" or "Master Saya". In addition, Saya is always concerned for Hotaru; shown when she visited Hotaru when she was sick. Although their personalities seem to be opposites, they still get along very well.

Hotaru met Tō naked with no shame and she did not think of him as a bad person at all. At the moment he gives her advice to stop eating dagashi because of her mouth ulcer, she doubted him but she is willing to do it.

Community content is available under CC-BY-SA unless otherwise noted.
Advertisement